On Friday January 3 I wrote that Bitcoin was likely to moon because of the developing Iranian situation.

Bitcoin (BTC) has risen $1,000 a coin since then. It is, however, easy to forget the altcoins.

When bitcoin goes up, the altcoins follow. Altcoins are lashed to bitcoin by exchanges and they move in relation to the dollar inline, but not exactly, with bitcoin. When bitcoin rallies so do altcoins, but some underperform and others overperform.

My basic premise for predicting this rally is:

1) Bitcoin is a safe haven asset. To repeat a cliché, bitcoin is the new gold.

2) Iranians will want to get into bitcoin as tensions rise.

3) Speculators will want to trade BTC in a crisis because it has more beta volatility “pop” than gold or oil, so you trade that for maximum situation volatility instead of slow gold or oil.

4) Anyone wanting to hedge their stocks might use the roughly, 5x hedging beta of bitcoin to cover their equities in a crisis situation. By my ready reckoning, currently, $1 of bitcoin gives you about $5 of equity downside hedge. That’s very cheap and compelling.

But bitcoin is not the only game in town. This is the performance of the big high privacy coin monero, bitcoin and upstart bitcoin cash: 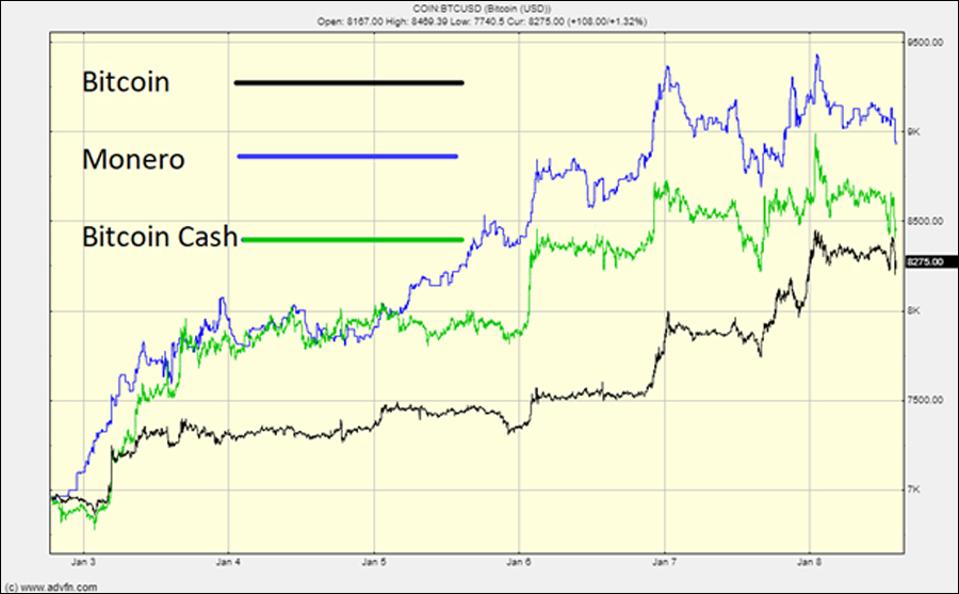 You can see that bitcoin cash and monero have even bigger beta than bitcoin. For maximum impact it is the altcoins that can deliver the maximum return in the high risk trading game.

It is truly fascinating that the ultra-privacy coin monero takes off early alongside oil and gold but that bitcoin lags a few hours. You can come up with your own conclusions on that one. I would put that down to two different audiences reacting to the news in different time zones.

Whatever the reason, you can see that monero is the winner and you can judge that it is the privacy aspects of the coin that gives it the extra punch as there are most certainly “big money” players who will want extreme secrecy when using crypto as a hedge or a haven.

This U.S./Iran conflict is not going to go away; as such there is a strong catalyst unpinning crypto for many months to come.

The more dire an investor’s prognosis for what happens next, the more bitcoin they should hold because the worse the developments the higher bitcoin and altcoins will rise.

In any event what is clearly established is that Bitcoin is a financial instrument that reacts to world events and that in itself it an extremely powerful use case, no less than any valuable futures derivative contract that trades in the billions of dollars of value between parties wishing to swap risks.