Bitcoin, the world's most valuable cryptocurrency by a wide margin, is treading water after rallying hard since its March crash.

The bitcoin price failed to breach $10,000 last week and has been trending downward since—despite a raft of bullish signals.

Now, as a number of smaller cryptocurrencies and bitcoin rivals make big gains, one tiny token has soared over 1,000% since its March lows.

Theta, the primary cryptocurrency token of the Theta decentralized video streaming network, has added over 1,000% to its price since the bitcoin and wider cryptocurrency market crashed in March, according to CoinMarketCap data.

Theta's massive gains so far this year eclipse bitcoin's 120% rally since the March coronavirus-induced crash—even as bitcoin looks on track to be one of the best bets of 2020.

The theta mega-rally comes as rumors swirl the San Francisco-based Theta Labs is poised to announce a partnership with YouTube-owner Google on Wednesday, May 27.

Theta Labs did not respond to a request for comment.

The Theta Network bills itself as a "decentralized streaming video protocol" powered by bitcoin's blockchain technology and is designed to give "users the opportunity to contribute their excess bandwidth and computing resources in exchange for token rewards."

A partnership with search giant Google, which recently launched the cloud gaming service Stadia, could be seen as an endorsement of Theta Labs' decentralized video infrastructure and business model.

Earlier this month, it was revealed Theta.tv will be included on future Samsung Galaxy phones with the software expected to be added to some 75 million existing devices.

"Our groundbreaking approach to streaming is a perfect fit for Samsung’s worldwide user base," Theta Labs co-founder and chief executive Mitch Liu said at the time.

"It’s a huge step toward our goal of making Theta a global infrastructure for video content and data delivery." 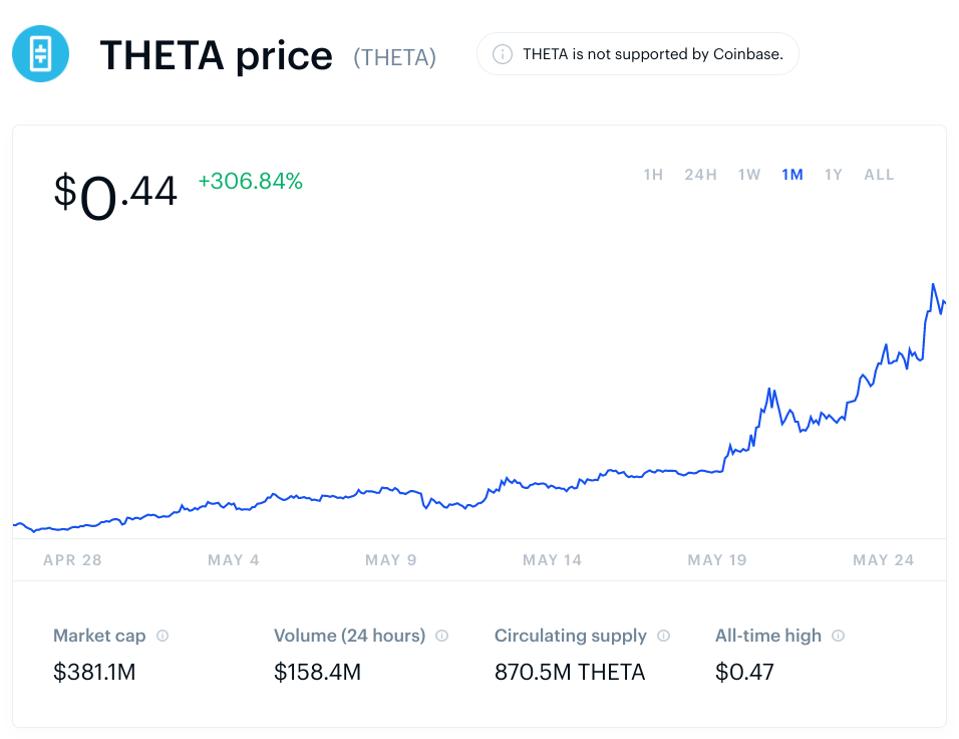 Meanwhile, the world's largest bitcoin and cryptocurrency exchange Binance has revealed it will support Theta’s upcoming mainnet upgrade. Binance also announced today it will launch a theta-U.S. dollar perpetual trading contract with up to 50-times leverage.

Similar bitcoin and crypto exchange announcements of support have boosted smaller cryptocurrencies in recent weeks, indicating the market is desperate for clearer direction.

Some bitcoin and cryptocurrency watchers have suggested a broader rally in small capitalization cryptocurrencies, including the likes of theta, could mean these tokens are "decoupling from the rest of the market."

"The small caps index is now up more than 15% so far in May, while the other indexes are struggling to even be in the green this month," analysts at London-based bitcoin and crypto exchange Luno wrote in a weekly update.