Litecoin Shows Its ‘Habit of Leading Bitcoin’ Once Again

A relationship – or lack thereof – between bitcoin (BTC) and litecoin (LTC) has been a recurring topic in the crypto community for years. In this rally, an early move by litecoin seemingly confirmed a theory that “LTC has a habit of leading BTC” once again.

As of press time on Tuesday (13:42 UTC), litecoin was up nearly 9% over the past 24 hours to a price of USD 53, outperforming bitcoin’s 6% move over the same time period to USD 10,933. The strong rally for litecoin even positioned the coin as the today’s best-performer among the top 60 cryptoassets by market capitalization, according to Coinpaprika’s ranking.

More notable, however, was that litecoin’s surge higher started on early Saturday morning, one day before bitcoin gained enough traction to break through the USD 10,000 level on Sunday.

Following litecoin’s rally on Saturday, bitcoin picked up steam throughout Sunday and Monday, before litecoin caught up again on Monday and went on to outperform bitcoin over the next few hours. 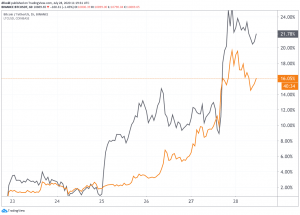 Indeed, the past weekend’s rally in litecoin is not the first time the cryptocurrency, often dubbed the silver to bitcoin’s gold, has signaled a coming bitcoin rally. The same also happened in late January this year, when the prominent bitcoin analyst Willy Woo correctly predicted that higher litecoin prices could pave the way for bitcoin. Shortly after, bitcoin followed up and soared to above USD 10,000.

Woo once again reiterated his view on litecoin’s predictive power back in April, when he said that “LTC has a habit of leading BTC.” What followed was once again a steady rise for the bitcoin price that ended with a high of just over USD 10,000 a month later, on May 7.