Inflation And Influencers: How Investors Can Send Dogecoin To $10

So much wow. When Billy Markus created Dogecoin (CCC:DOGE-USD) in 2013, he did so as a joke. DOGE’s mining reward system was so ludicrously structured that no one could possibly have taken it seriously; at the start, miners could earn anywhere from zero to 1 billion coins for completing a single block.

But Dogecoin holders have had the last laugh. Today, the cryptocurrency is worth almost $10 billion and has one of the most dedicated followings of any tradable security. Lucky investors could have turned a $1,000 initial stake into nearly $1 million.

Core to this success was a 2014 technical change that developers quietly made, although celebrity endorsements helped. At block 145,000 – the coin switched from its random mining reward to a consistent payout; miners now earn just 10,000 DOGE per reward. That move capped today’s inflation at 5.256 billion coins per year and removes the joke that initially made the cryptocurrency unusable.

Renewed interest in Dogecoin’s development could spark even more changes. If its inflation trajectory changes again, DOGE at $10 might become a reality.

Why Are DOGE Prices Stuck Around 6 Cents?

Today, Dogecoin lives life as an inflationary coin. Much like fiat currencies, more gets minted every day. And just like its government-backed counterparts, Doge’s upside remains limited because buyers know they can always acquire more later. (For a real-world example, consider that the EUR/USD exchange rate of 1.2 is virtually the same as in 1999). In other words, when your currency adds 4% supply every year, it will eventually find a price equilibrium with other 4% growth currencies.

Even without inflationary changes, the price could still hit $1. The cryptocurrency has 130 billion coins outstanding; a $1 price-per-coin will still leave it 55% the size of Ethereum (CCC:ETH-USD), the world’s second-largest crypto. And because only the marginal trade matters in asset pricing, even a few major account owners could theoretically send values soaring.

With some luck, the coin might even stay at $1. With renewed interest in the Shiba-Inu-fronted coin, developers have since jumped back into its code repository, proposing crucial usability and speed improvements. Developers have pushed major changes before – DigiByte and Litecoin (CCC:LTC-USD) snippets features prominently in Dogecoin’s source code. More may be on the way.

Inflation will also become a minor issue over time – the outcome of a flat reward divided by a growing capital base. By 2040, Dogecoin’s inflation rate would have dropped to just 2.4%, or roughly the same as U.S. dollars today. By 2060, it would be 1.6%, making it deflationary relative to dollars. 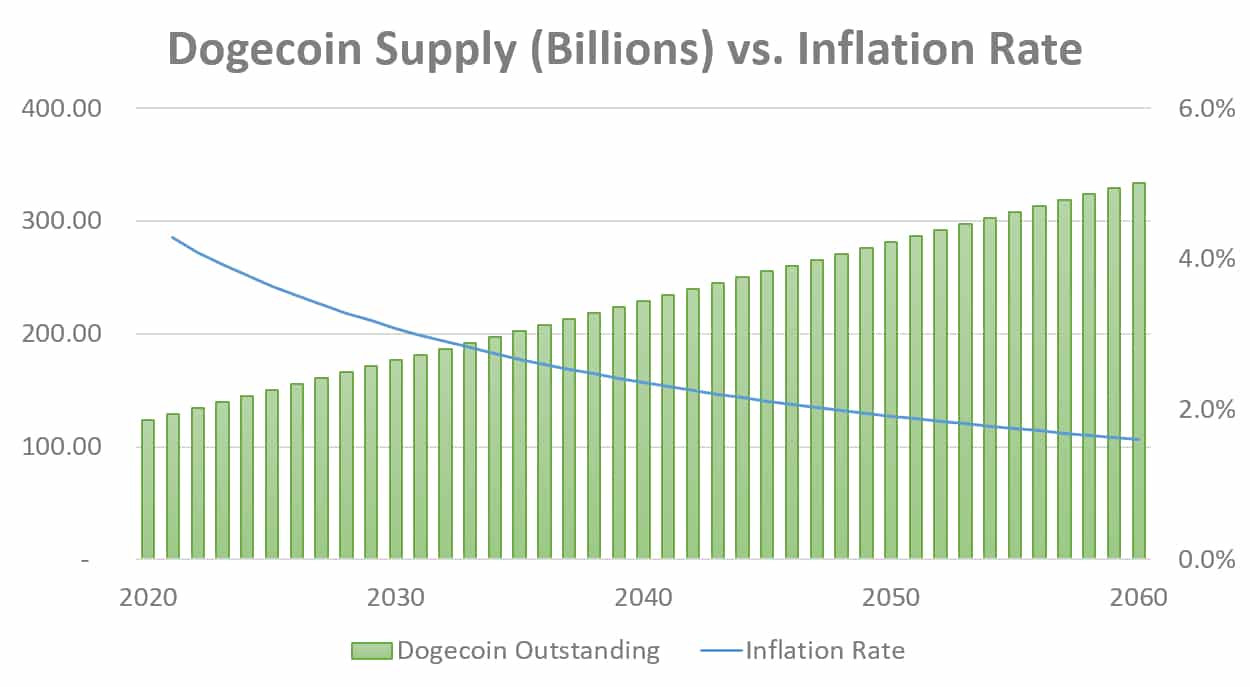 However, sending Dogecoin to $10 will require an even more significant change: a switch to a deflationary system sooner than 2060.

Currently, miners earn 10,000 DOGE per block, which happens about once per minute. That puts a $10 price target firmly out of reach; no matter how many people buy Dogecoin, its ever-growing supply makes price gains an uphill battle. A $10 price means Dogecoin needs to surpass Bitcoin in market capitalization and stay there.

But in open-source cryptocurrencies, no rule is permanent. With enough core contributors voting for change, even projects as large as Ethereum can alter its fundamental building blocks to keep up with newer coins.

Today, Dogecoin finds itself at the same crossroads. Its codebase is rapidly aging, and newer coins like Cardano (CCC:ADA-USD) and Polkadot (CCC:DOT-USD) are nipping at its heels. Even Bitcoin looks vulnerable to third-generation coins that can perform transactions far faster and cheaper.

So far, Dogecoin’s grassroots-based approach has helped the cryptocurrency avoid obsolescence; people buy the coin for fun and profits, not usability. But unless larger stakeholders also step up, these efforts can only go so far.

Ordinarily, prominent crypto stakeholders will help fund code and business development. The Cardano Network, for instance, has three official organizations to manage standardization, technology and developer support. Together, they share around billions in funding. Ripple Labs has a similarly large budget for promoting XRP (CCC:XRP-USD).

Meanwhile, DOGE relies on 200 part-time coders and a legion of online fans for support. Many look like core contributor Ross Nicoll – working for free to maintain an ever-growing system. It’s why much of its code gets lifted from other coins: there are simply not enough resources to develop proprietary code. Others are like the thousands of social media followers on Dogecoin; many constantly hound the developers to cap the currency’s supply.

If investors want to send Dogecoin prices to $10, far more is needed than buying the coin and posting tweets. It needs a benefactor to help fund improvements.

Already, the coin has some big-name backers. On Thursday, Elon Musk promised to literally send the coin to the moon on a SpaceX rocket. He could make an even bigger impact by starting a “Dogecoin Foundation” to fund development and promote adoption among startups and enterprises. So far he’s avoided that, blaming the “Dogecoin Whale“. Regular investors can help by contributing, rather than hounding developers.

Dogecoin to $10 is more than a dream – it’s a possibility that’s just around the corner if the community one day bands together.