February Is Often Good for Bitcoin Prices, Will History Repeat in 2019?

BTC generally posts losses in January before putting on a good show in February. The January losing streak looks certain to extend to the fifth year running with a close tonight in the negative. 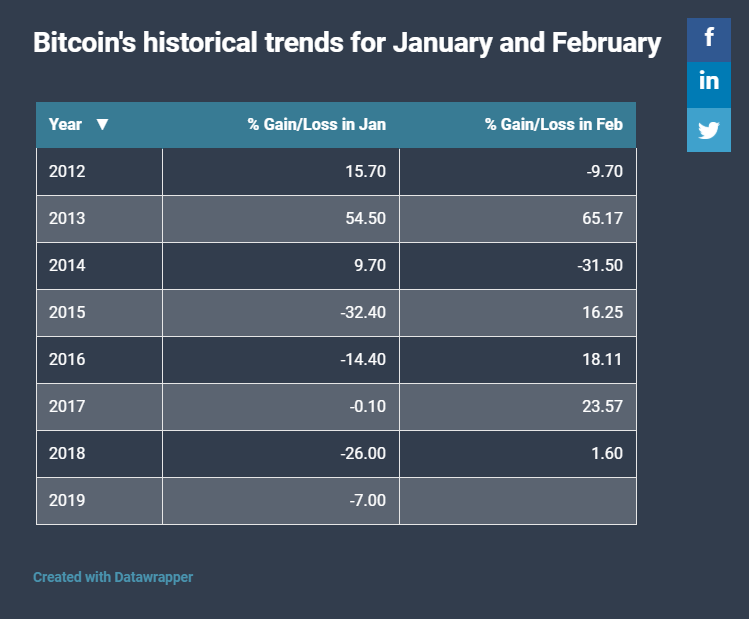 As seen above, BTC has posted gains in February in five out of the last seven years.

However, the odds of bitcoin posting gains in February for the fifth year straight are quite low, as the recent drop to six-week lows has put the bears back in a commanding position.

The bearish setup, however, would weaken if the crucial 200-week moving average support, currently at $3,298, holds ground for the second time in two months. That could yield a sustained rally to $4,000.

The above chart shows the 5- and 10-month MAs are trending south and BTC is trading well below these averages for the first time since 2015.

Put simply, the primary trend heading into February is bearish, while bullish conditions prevailed in the previous three years. Hence, BTC may have a hard time posting sustainable gains in the next four weeks.

BTC jumped above $4,000 in mid-December, confirming a bullish divergence of the RSI – a strong indicator of a bearish-to-bullish trend change.

The follow-through to that trend reversal, however, has been anything but bullish. Moreover, prices fell to six-week lows earlier this week.

BTC’s inability to produce significant gains despite the RSI divergence indicates the bearish sentiment is still quite strong.

On the weekly chart, BTC has carved out a bearish-lower high above $4,000, reinforcing the negative view put forward by the downward sloping 10-week MA.

The cryptocurrency, therefore, could soon revisit December lows near $3,100. A violation there would establish fresh lower low and open the doors for a deeper drop below $3,000.

The probability of BTC posting gains in February would improve if the 200-week MA, currently at $3,298, again serves as strong support. That average had put brakes on the sell-off in December and was followed by a corrective bounce to levels above $4,000.