The global economy shrunk a fair bit in 2020. However, equity and crypto bull markets kept investors happy throughout last year. This trend shows no signs of letting up, as Bitcoin (CCC:BTC-USD) continues to gain ground despite the occasional hiccup. But other altcoins are generating a lot of buzz as well. One of them is Dogecoin (CCC:DOGE-USD), a decentralized, peer-to-peer digital currency supporting online payment devoid of traditional banking fees.

Tesla (NASDAQ:TSLA) billionaire Elon Musk is one of the early advocates for the coin, which has surged almost 1,000% so far this year. Although the cryptocurrency started as a joke in 2013, it is now one of the fastest rising stars in the crypto space on the back of several celebrity endorsements.

Currently offered on the world’s largest cryptocurrency exchange, Binance, Elon Musk has called for crypto exchange Coinbase to greenlight dogecoin for its platform as well. Considering all the interest we see in the digital currency, this could happen sooner rather than later.

The main thing going for Dogecoin is that it’s inflationary rather than deflationary, meaning it mimics real-world currency due to no restrictions on the number of coins in circulation.

While it is tough to predict dogecoin’s price trajectory moving forward, the endorsement from high-profile individuals and the general enthusiasm surrounding bitcoin and the wider crypto space will continue to drive dogecoin upward.

Dogecoin: From a Meme to a Viable Altcoin

Software engineers Billy Markus and Jackson Palmer launched Dogecoin in 2013 as a joke. However, it has grown since that time and is now within the top 20 crypto coins with a current price of $0.05785 and a market cap of approximately $7.46 billion.

What is driving this impressive bull run? First is celebrity culture. Elon Musk, Gene Simmons, Rapper Lil Yachty, and Snoop Dogg are some of the major names that have thrown their weight behind Dogecoin, leading to a significant increase.

Much like Bitcoin, investors are on the lookout for new digital currencies that will climb by a similar margin. The fear of missing out (FOMO) and celebrities’ endorsements will drive the price to new highs.

Second, major financial institutions are warming up to the digital currency with each passing day. PayPal (NASDAQ:PYPL), Square (NYSE:SQ), Bank of New York Mellon (NYSE:BK), JPMorgan (NYSE:JPM), Citi (NYSE:C), MasterCard (NYSE:MA), and Visa (NYSE:V) are some of the names that are now expanding their product suite to involve crypto users.

Dogecoin is also now accepted as a form of payment by some online stores for payment. Its also used as a tipping service for any blog or post that you believe warrants more attention.

Price forecasts for Dogecoin are incredibly bullish. Dallas Mavericks owner Mark Cuban is confident that the digital currency can reach $1. Dogecoin founder Billy Markus has said that Dogecoin’s bull run says crypto’s rise is “not something I can comprehend.” However, if transaction volumes persist, $1 is not out of the question. 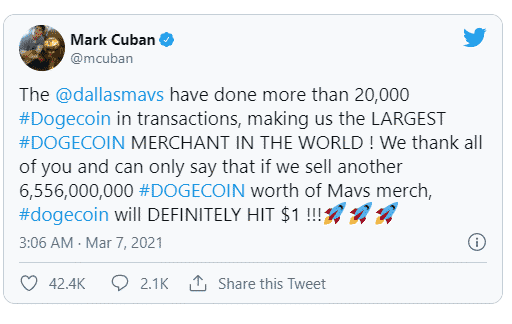 Due to volatility, though, it’s better to chart the asset and take profits at regular intervals. It would be best if you did not treat Dogecoin as a buy-and-hold investment at this stage.

On Feb. 8, the price of dogecoin hit the highest price of $0.082605. That is a long-term target, but in the near term, bulls are hoping to consolidate their gains and march towards $0.0641. Dogecoin shows all the signs of consolidating at a bullish retracement.

It needs to hold steady along the bearish trendlines, and then a breakout will occur. It’s long overdue since the price had been moving sideways within the three moving average lines for a while.

Everyone is talking, investing, and interacting with crypto like never before. Hence, crypto bulls now find themselves in a unique position. For the first time, large financial institutions are loosening regulations. They are allowing cryptocurrency custody solutions to hold large quantities of tokens. Major payment platforms like PayPal and Square now allow customers to buy, hold or transfer crypto.

Against this backdrop, we will continue to see Dogecoin and other altcoins gain steam. However, as I said in the previous sections, it’s important to time your entries and exits and takes profits regularly.