Bitcoin Bagholders Will Limit This Rally

Bitcoin (BTC-USD) has staged an impressive rally in 2019, up 125% year to date and nearly 175% from its lows in December 2018. I am a perma-bear on cryptos, not necessarily on blockchain technology but bearish on bitcoin as a form of currency and certainly at the current price. I see this rally as having run its course with the exchange rate approaching significant technical resistance between $9,000 and $11,000. This article describes my thesis for how bagholders from the 2017 rally, coupled with the shattered previous air of invincibility associated bitcoin, will limit sustained rally. 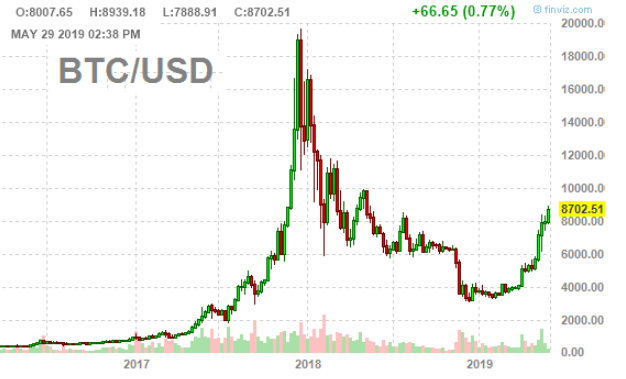 There are a couple of market adages that are nearly ingrained in every trader's mind with some holding more truth than the other. Some are anonymous truisms that are generally good advice that keeps people out of trouble or doing something stupid when making investment decisions. These include "Don't fight the trend," "Never sell a new all-time high," "Never try to catch a falling knife."

Others come from quotes by famous investors that have earned respect from the investing community by decades of results. Below are some of my favorites.

The reason I bring these up here is that all of them are relevant to the trading environment of cryptocurrencies today and help frame the current market psychology. When the market was making new high after new high in 2017 those adages went in favor of bitcoin by keeping people from selling and not fighting the trend. Behavioral biases like allusion of control and confirmation bias only added to the speculative fervor fueling the rally higher as everyone in considered themselves geniuses.

The crash that followed must have been extremely humbling to those that got in big at the top. Clearly, many investors and traders continue to hold large unrealized losses potentially to this day. It's likely many won't be getting back or simply lost confidence. This is the setup that the new rally in crypto is going against. Skepticism as high as ever.

I believe bitcoin is fundamentally broken; not the blockchain protocol or cryptographic technologies, but broken from its original promise with a now shattered reputation. Bitcoin lost its air of invincibility following its historic rally in 2017 and subsequent crash in 2018 and may never regain that lost trust with the general public. The market bottoming at around $3,200 and the recent rebound simply reflect more normalized trading where supply and demand will meet based on support and resistance levels, something that was absent when the market was in its parabolic stage.

Bitcoin investors today are battle-scarred from the lessons of 2018. For all the stories that made headlines about bitcoin millionaires, just as many came out over the past year about the countless people that apparently lost everything or watched paper profits evaporate. The proverbial bagholders are real. Gone are the days of "HODL", hardened bears will now represent selling pressure at every move higher.

Where Are The Greater Fools To Drive The Price Higher?

In late 2017, as the bitcoin rally accelerated higher, it was easy to show the chart to an unsuspecting friend or colleague and explain how easy this money was and be confident that the next move higher was a sure thing. More people learning about cryptocurrencies, and how the blockchain would soon "revolutionize the world" led to a fever of enthusiasm as more people bought in, fueling the rally towards $20,000.

Fast forward now and with bitcoin still down over 50% from that all-time high, all the people that stayed away can rightfully claim, "I told you so." The events of 2018 reaffirmed the naysayers. Public comments by influential figures like Warren Buffett and Jamie Dimon calling bitcoin a gambling device or outright fraud have not helped with mass adoption.

The point here is that bitcoin will need a new wave of believers for the next level higher. The current rally off the lows can still be described as a dead-cat bounce without a clear break of the $10,000 level. The question is where will the bullish price action come from if that threshold represents significant resistance? I see major level of "under-water" bitcoin positions with average costs between $10,000 and $12,000 within the current trading float that will limit the upside. People will look to both realize gains from the recent rally, or exit legacy positions giving up on the dream of riches.

I remember first hearing about bitcoin in 2012 when it broke $100. The aspect that intrigued me the most coming from a background of self-studying Austrian Economics was the promise that this new currency had a finite number of units and the supply was capped at 21 million. Sure enough, some people still hold onto this feature as a bullish factor, suggesting limited supply and growing demand.

The problem, however is that there has been an explosion of competing cryptocurrencies and digital tokens entering the space through initial coin offerings, making bitcoin just one of many alternatives. The website CoinMarketCap.com tracks over 2,200 of such cryptocurrencies with new ICO planned almost every week. The market cap of all cryptocurrencies according to the tracker is $276 billion, with bitcoin representing $154 billion or 56% of the aggregate. Other major cryptos including Ethereum and XRP have gained "market share" over the period. 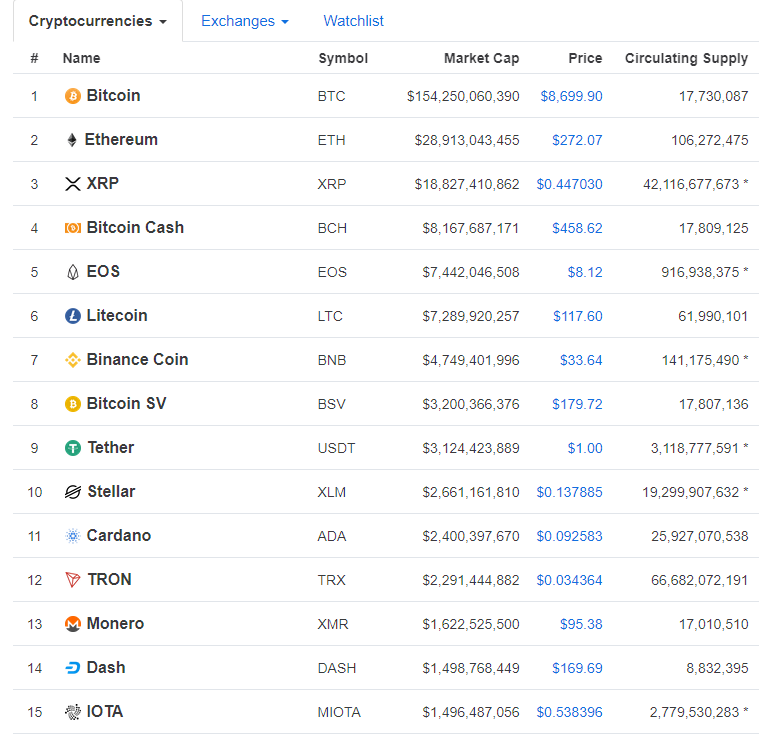 While each coin or token has technical differences, I argue that every dollar invested in an alt-crypto is one less dollar into bitcoin. The number of available units across all currencies grows exponentially, effectively diluting the crypto market. It's true that the price of bitcoin (and every other security) moves based on buying or selling intensity. It is not necessary for $154 billion in new money to enter bitcoin for the price to double, but significant inflows are necessary for a sustained move higher, and I don't see that coming.

I argue that the number of competing currencies coupled with the pain of the last bitcoin crash limit upside against the dollar exchange rate. There is a certain amount of money in the world allocated to cryptos chasing too many different coins. The price action is purely speculative and trading only on technical reasons. The euphoria of 2017 was a one-time thing that ended when the bubble burst. Without crypto gaining mass adoption as an everyday currency and median of exchange, it will remain a niche curiosity.

Bitcoin and cryptocurrencies as an asset class lost its luster over the past year and this has created a new layer of skepticism and bearishness. People getting into crypto today are just as likely to be bullish or bearish, given the completely speculative nature of the asset class. Headline-making security disasters at crypto exchanges, the reputation of being extremely volatile, the uncertain future among a number of alt-currencies, and the still low mass adoption of crypto as a method of payment are all valid reasons the excitement level of the recent rally has been subdued.

I'd personally prefer $8,850 cash right over a bitcoin, and since most people would likely make the same choice if given the option, this leads me to believe that bitcoin is overvalued. I see choppy trading with ultimately lower prices.