Altcoins: Ahead of Libra, XRP Cryptocurrency Gains Toehold in Commerce

Facebook’s Libra may be grabbing all the headlines at the moment, yet a major cryptocurrency already exists that’s gained a toehold in mainstream commerce.

XRP, the third-biggest cryptocurrency by market value, seeks to succeed where bitcoin and other digital currencies have largely failed: in powering fast and low-cost transactions.

In a rare example of a cryptocurrency finding a practical use beyond speculative trading, it has gained a certain amount of traction, with some large financial firms using XRP for international payments.

Yet the price of XRP, often referred to as Ripple, has dropped by a quarter so far this year, even as bitcoin has more than doubled and other smaller coins such as ethereum have made slim gains.

XRP’s price performance goes against assumptions of a positive correlation between real-world usage and the price of cryptocurrencies. The fact that bitcoin, the largest digital currency by far, has grabbed an even bigger share of the market this year is a sign that traders looking to capitalize on volatile price moves remain the industry’s main driver.

To track the emergence of hundreds of smaller rivals to bitcoin, collectively known as “altcoins”, Reuters is looking at the leading players as they grab the attention of investors, companies and regulators.

The third in the Reuters series on altcoins looks at the prospects, and challenges, for XRP.

Seven-year-old XRP is one of the most successful examples, thus far, of attempts to build cryptocurrencies capable of entering mainstream finance and commerce.

It has been developed by California-based tech company Ripple, which offers a blockchain-based payments platform. XRP is intended to act as a kind of bridge for cross-border payments for firms that use Ripple, and can also be used for e-commerce and peer-to-peer transfers.

The currency was designed to help these companies - from payment providers to remittance firms - settle transactions instantly, pay lower fees and free up capital typically tied up in payments using traditional money.

With traditional transfers, firms often use working capital to maintain balances in their settlement accounts, ensuring liquidity as one currency is converted to another. That helps customers receive funds more quickly.

Ripple says customers can use XRP instead of traditional money for liquidity, allowing firms to free up working capital.

It says payments using XRP settle in four seconds, compared with over an hour for bitcoin and three to five days for traditional systems used for fiat money.

SO HOW’S THAT DIFFERENT TO BITCOIN?

XRP, like Facebook’s proposed Libra, veers away from the ethos of bitcoin, the original cryptocurrency, which aimed to sidestep the financial establishment by dispensing with a central authority.

A team of developers at Ripple maintain the XRP ledger’s software, stewarding the technology. That, potentially, means that companies are more comfortable dealing with XRP than bitcoin, which is largely unsupervised and unregulated.

While bitcoin “miners” compete against each other using powerful computers to solve algorithms and earn new coins, XRP’s entire supply of 100 billion was created at its birth.

Ripple now holds large reserves of XRP in escrow accounts, selling the tokens to large investors to boost liquidity and widen the spread of the technology. That means the company has centralized control over the supply of XRP. 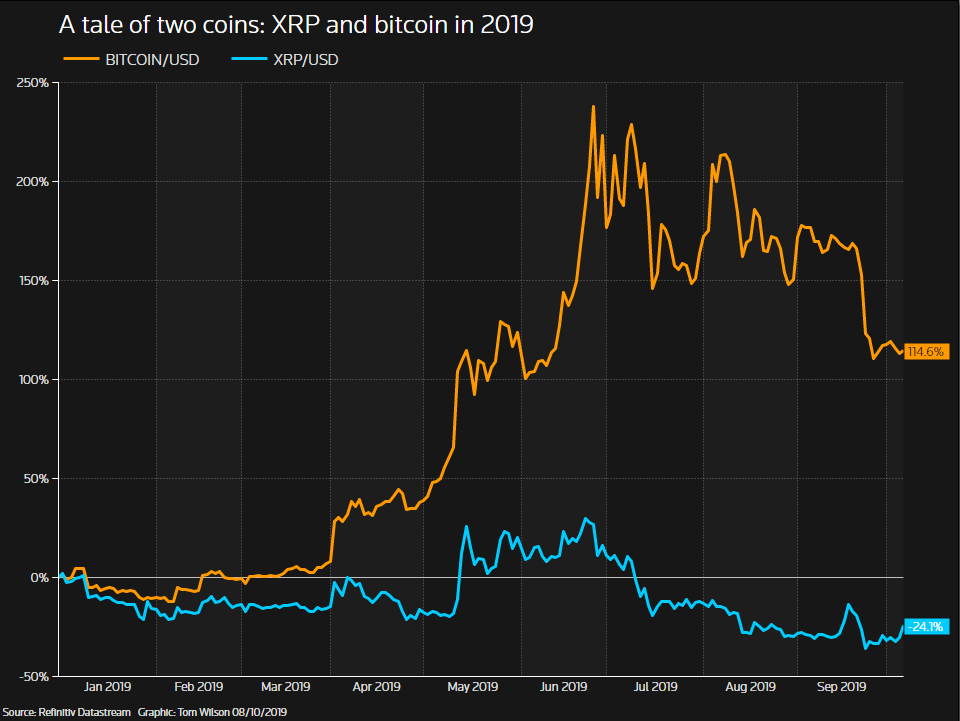 While there are some similarities between Libra and XRP, notable differences also exist.

Both coins aim to address problems in the payments sector, from high intermediary fees to lengthy transfer times. Yet Libra’s target audience differs, with Facebook saying it will offer people who lack bank accounts access to easier money transfers. XRP, in contrast, is targeted at traditional financial firms.

And while XRP’s value fluctuates, Libra’s doesn’t: it is a “stablecoin” whose backing by traditional assets such as bank deposits and short-term government securities is designed to dampen volatility.

Nevertheless Libra, which has faced fierce opposition from politicians and regulators, could affect XRP’s prospects, not least because Facebook’s vast 2.4 billion users offer the currency an existing user base.

For the most part, payment and FX firms.

Ripple says around a dozen firms use XRP for liquidity.

One of the most well-known is U.S. remittances firm MoneyGram International (MGI.O), in which Ripple invested $30 million in June.

London-based Mercury FX, which counts small businesses and wealthy individuals as clients, uses XRP to facilitate payments into and out of countries such as Mexico and the Philippines.

“The top three reasons one would use it would be speed, costs, security,” said Alastair Constance, its founder. “Your speed to settle a payment is higher, and your cost comes down dramatically.”

HOW HAS THE MARKET RESPONDED?

XRP has slumped around 25% this year, versus a near-115% gain for bitcoin. To be sure, other altcoins have also failed to match bitcoin’s advance. Yet other major players such as ethereum, the second-biggest by market value - the price of a coin multiplied by the number of coins in the market - have stayed above water this year.

The slide has come despite XRP gaining some traction in the global payments business, which covers anything from card payments to wiring money overseas and, according to consultancy Accenture, is worth about $1.5 trillion this year.

Crypto market players say that Ripple’s sales of XRP have ratcheted up pressure on prices and tempered any boost from XRP’s payments progress.

Ripple holds XRP in escrow accounts and sells directly to the market to boost liquidity. It said in a July report that XRP markets should resemble traditional foreign exchange markets, which are typically highly liquid and efficient.

“Ripple needs to provide the token, to encourage the spending, the use of that in their system,” said Denis Vinokourov, head of research at BeQuant, a crypto exchange in London.

“It’s a necessary evil. It hurts the price in the short term, but in the long term the usage of it will eventually increase.”

“We think about XRP price and volatility over a longer arc of time, not day-to-day or week-to-week, but rather over the course of years,” she said.

“What we’re focused on - what we think will build greater stability in the asset - is its utility and liquidity.”

Unlike other cryptocurrencies, XRP is highly liquid therefore attractive for high-frequency traders, hedge funds and other investors who seek to trade off short-term price moves in digital coin markets.

Still, some market players said the heavy supply of XRP in markets pushed prices down and thus makes it unpopular with longer-term investors.

“Volumes and volatility from a trading perspective breed opportunity – it’s fantastic for the automated trading world,” said Cameron Dickie, head of EMEA sales at crypto market maker B2C2. “But it’s not so good for people looking to buy and hold.”